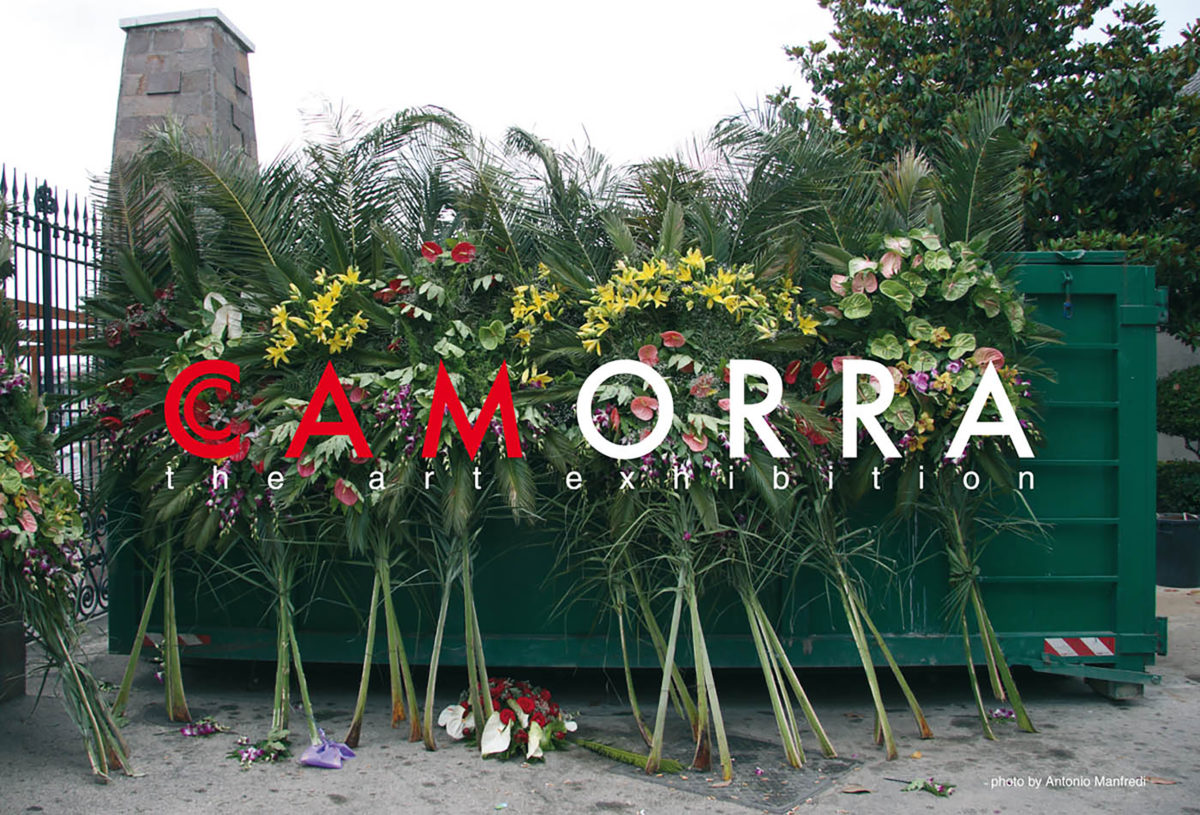 “Fires set for unpaid protection money are no longer sufficient, rubbish is not enough, we do not want only the pictures of people shot dead during punishment ambushes…we, the art folk, long for more. We want to wake up people consciousness through unreal images and by recording actions and behaviours that are as much usual in our territory as to undertake universal value. Abuse on weak people, social and political relationships denoting the imposition by criminal entity, control on life, on movement and on individual freedom from a creature which jaws look impossible to escape: this and much more is CAMORRA.
Who can better than 17 Neapolitan artists express on this topic?
And, who can better than a border museum – as CAM – arrange an exhibition on the social connotations of the criminal bloodsucker gripping men?
The exhibition CAMORRA raised from the considerations by Antonio Manfredi – exhibition curator and director of CAM – and from fearing that impotence is able to take the upper hand. For a concretely efficacious art, born from Evil but detaching itself from it – June the 20th at 7.00pm until July the 20th at CAM in Casoria.
The exhibited works will be the oneiric or ironic visions of people experiencing on their own skin restrictions and consequences of a mental status which slips into social behaviour. How could you not think to the rubbish flood Naples is in since months by looking at the redeeming Virgin standing out of the coloured and stinking heaps in the provoking work Nostra signora della monnezza (Our Lady of Rubbish)? Or, how could you not smile before the statue of Padre Pio at the top of a mount of tires looking like he is trying to protect them from fire-raiser vandals? The artistic perspectives are dialoguing and confronting each other in an exhibition aiming to witness the degrading background surrounding us, those buildings, jails for the soul, in which tragedies take place and where the secrets of a persecution enduring in the human history are whispered in the dark. A wall oppresses and occludes the vitality of the mountain which serves as oleographic background to the lack of development and growth of never-been-children boys, forced to live according to deviated models or in sick environments. Though the Feroce felino (Wild feline), devouring everything, keeps respect for the class by means of an ancient religion symbolized by an hybrid being and from mysterious signs of relationships of strength and imposition. Twisting figures, as images reflected into the mirrors of consciousness, appear as oneiric visions. An institutionalized robbery – as the one in Cassa del Mezzogiorno (Midday/Southern Italy Coffin) – becomes a modern coffin in a gloomy work exposed on occasion of the exhibition. The Candore dell’innocenza (Purity of Innocence) of a prisoner overturns in the shoes of the persecutor, while the ones knowing the reality fear it and cover their eyes with their hands left still instead than acting.
On occasion of the opening, artistic actions will take place meanwhile words of journalists committed to the topic will slide on the several screens as they turned to creative writers for this occasion. 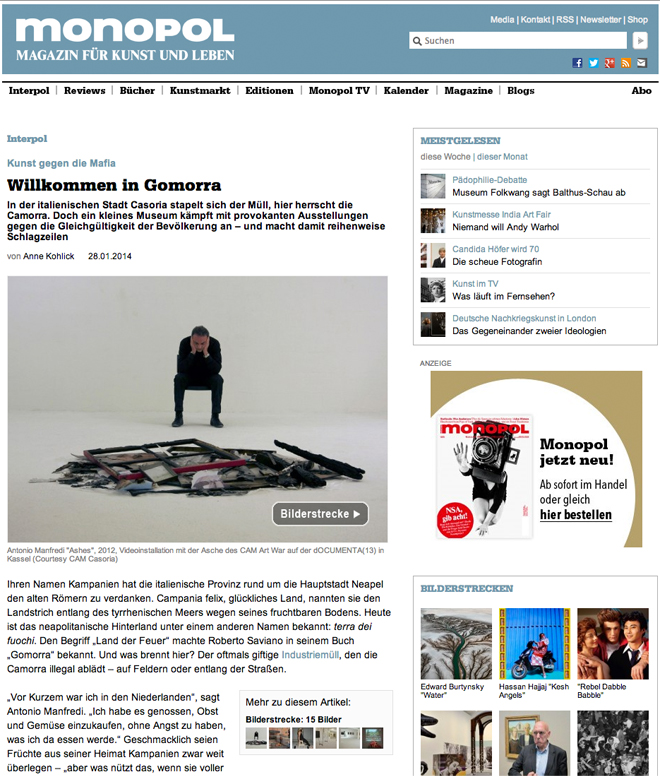 In the photo of Monopol Magazine frame by video of Antonio Manfredi for the performance and installation untitled A she S d(13) by Wiriam Wuttke. 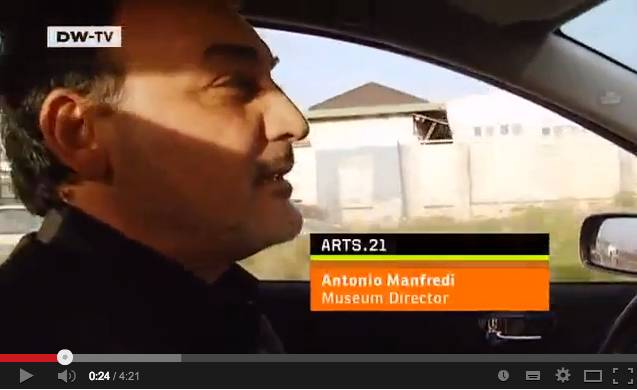 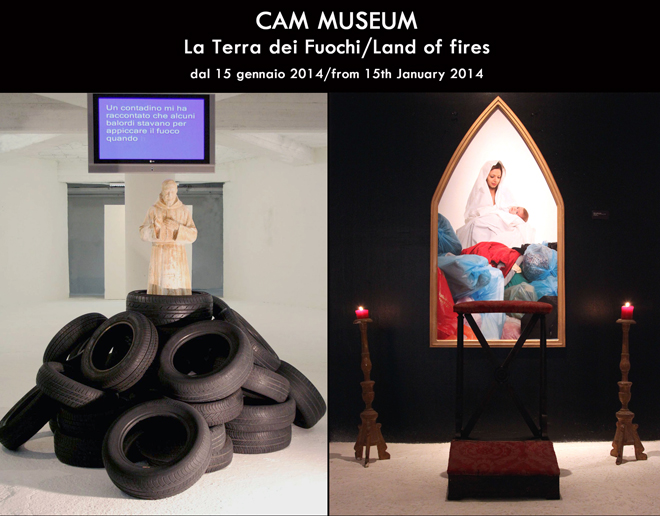 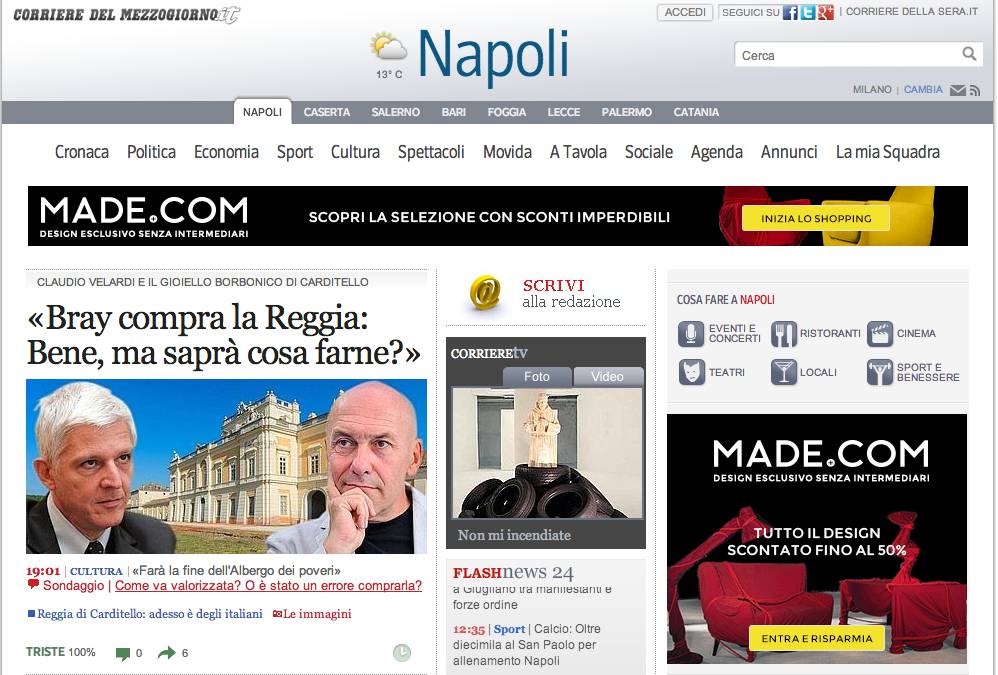 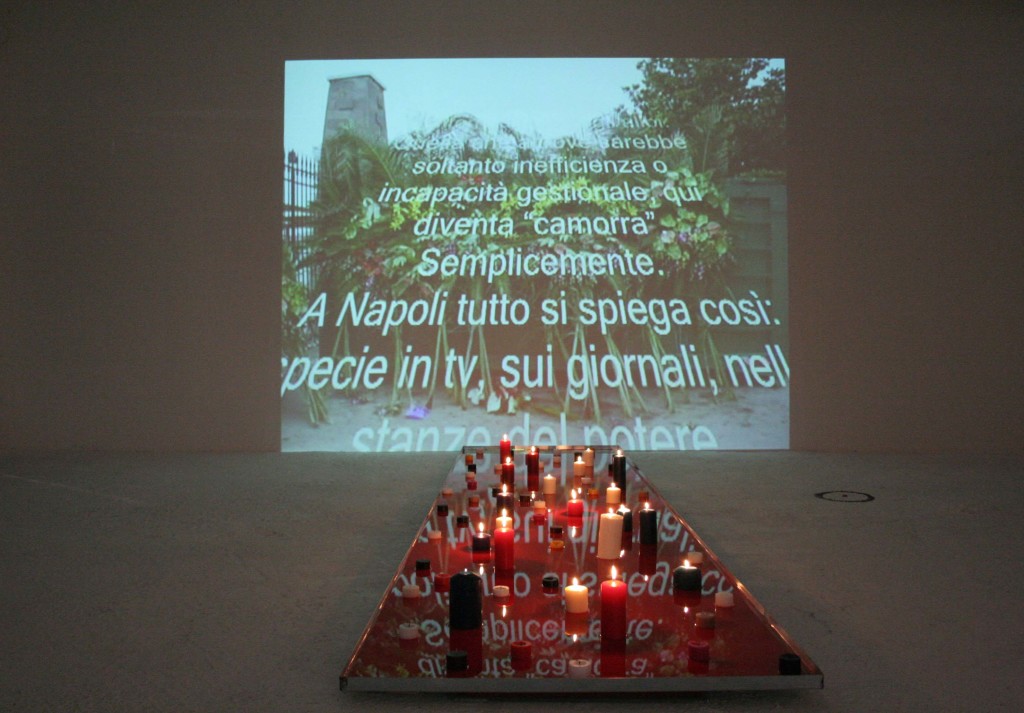 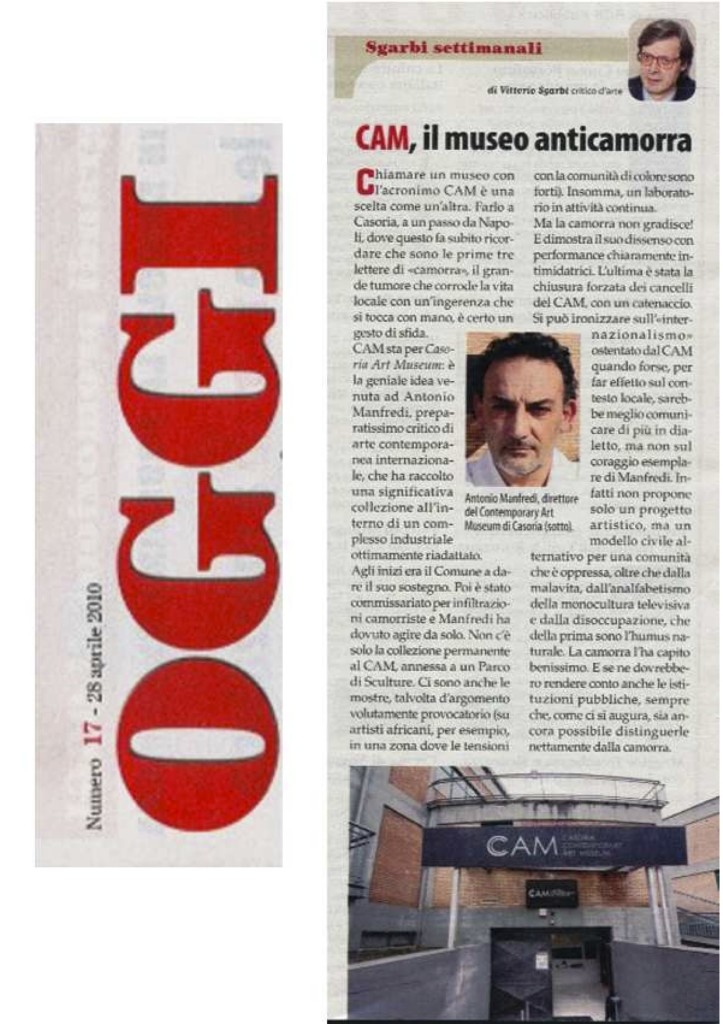 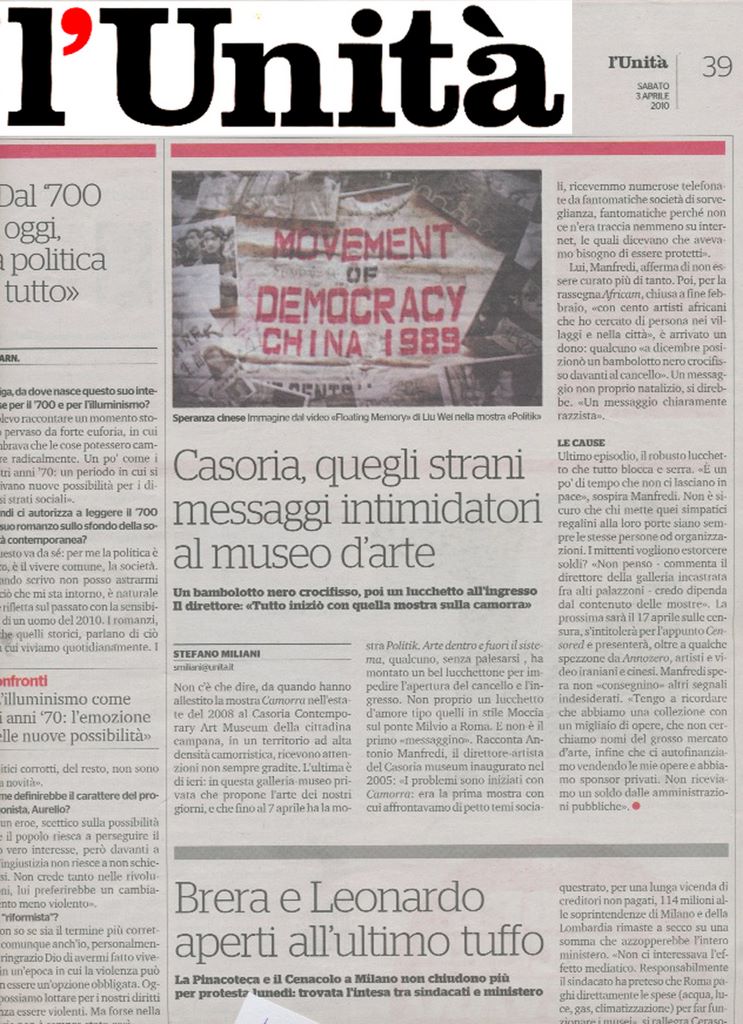 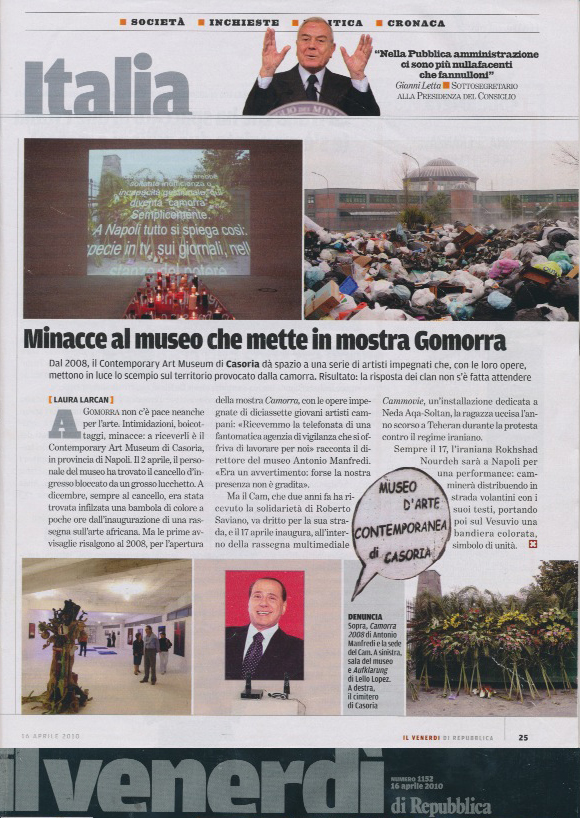 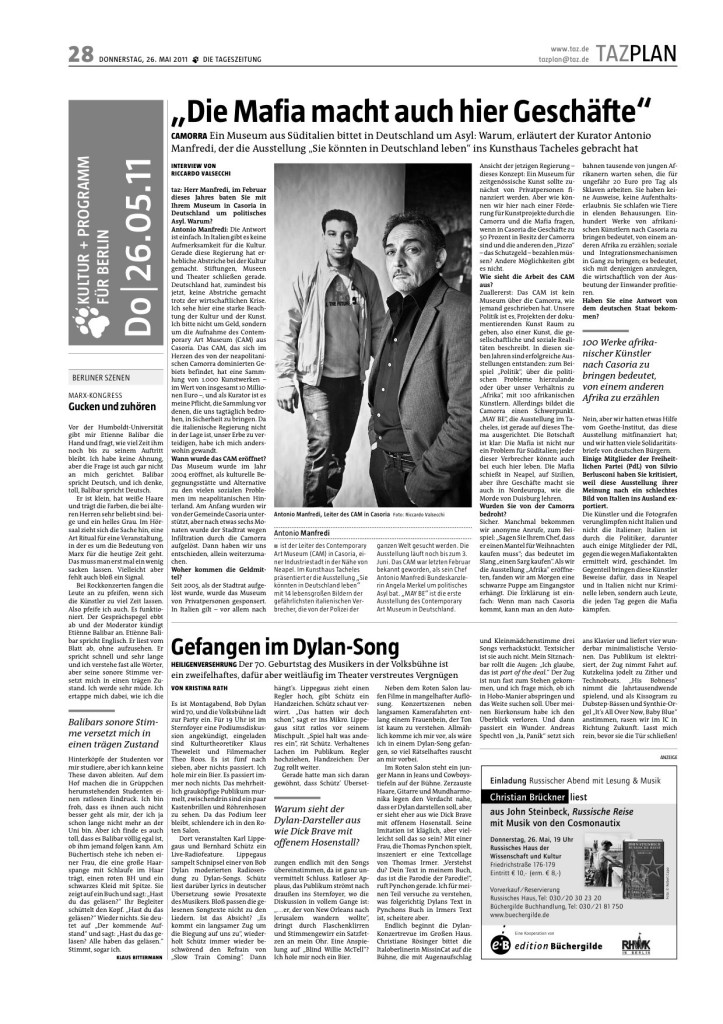 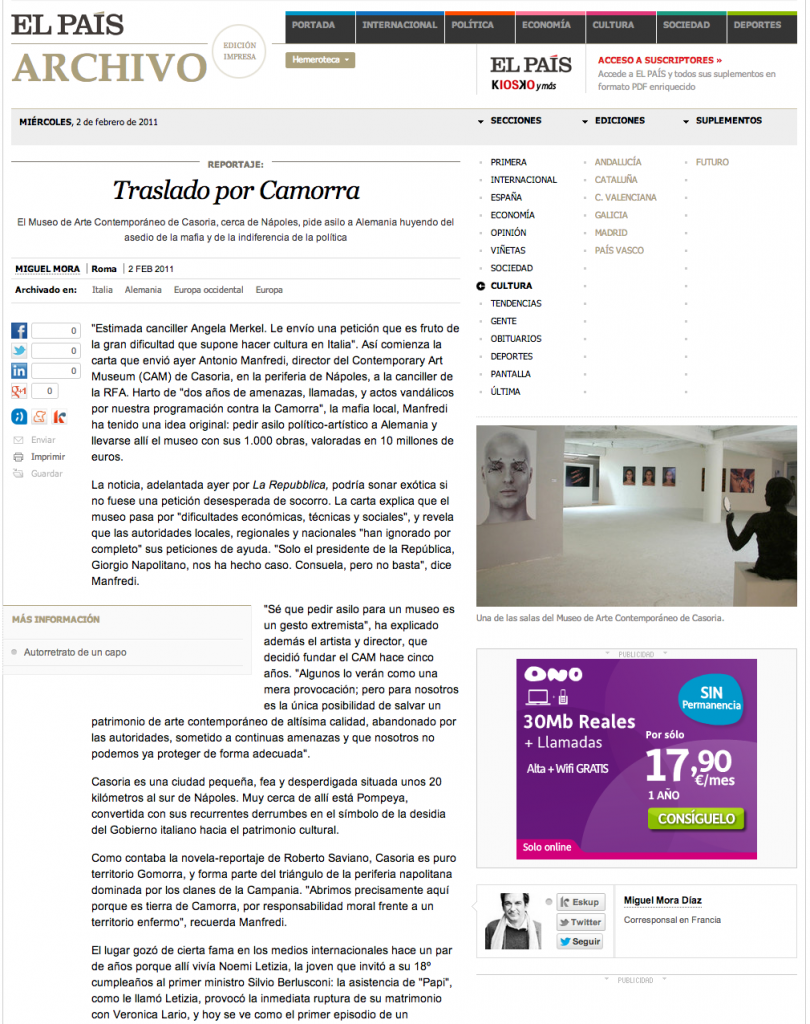 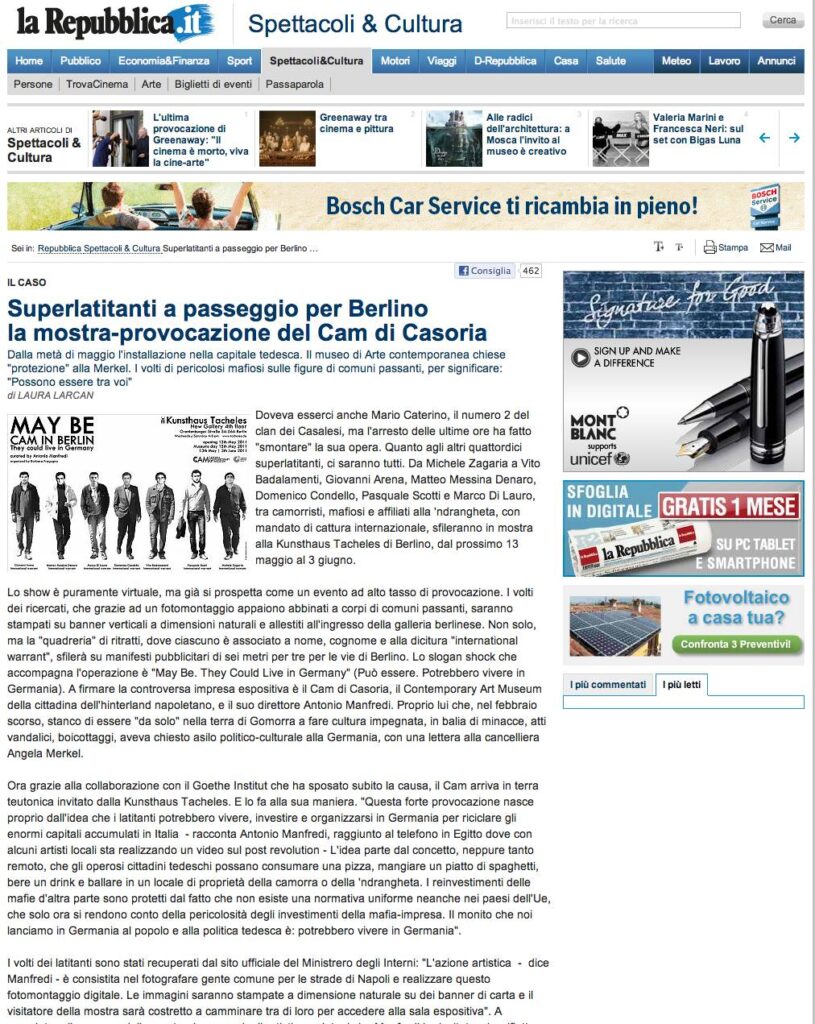 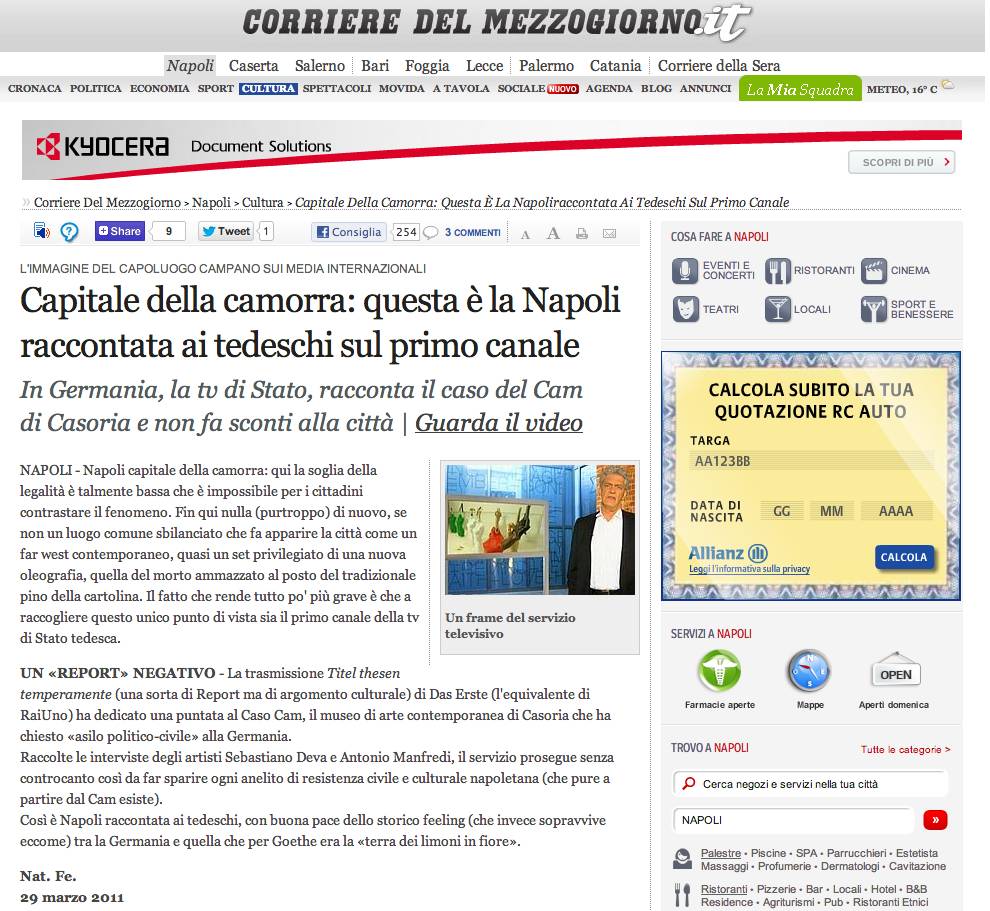 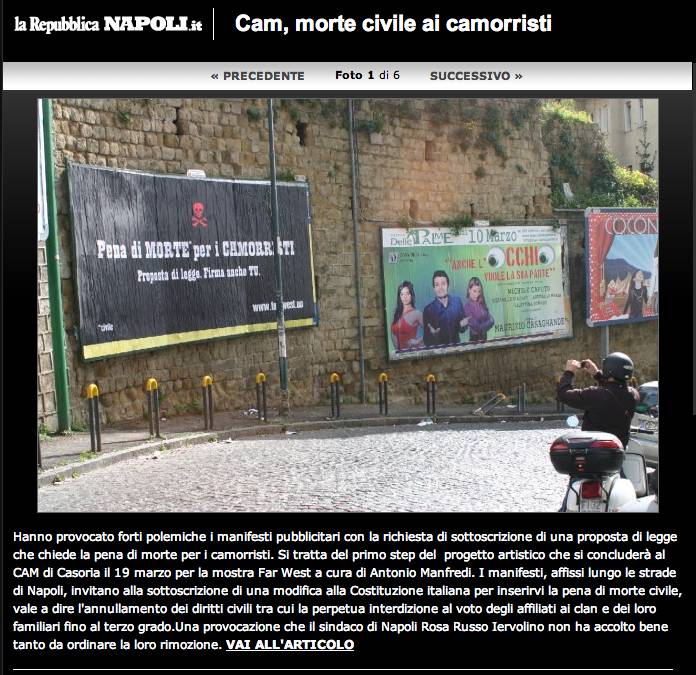 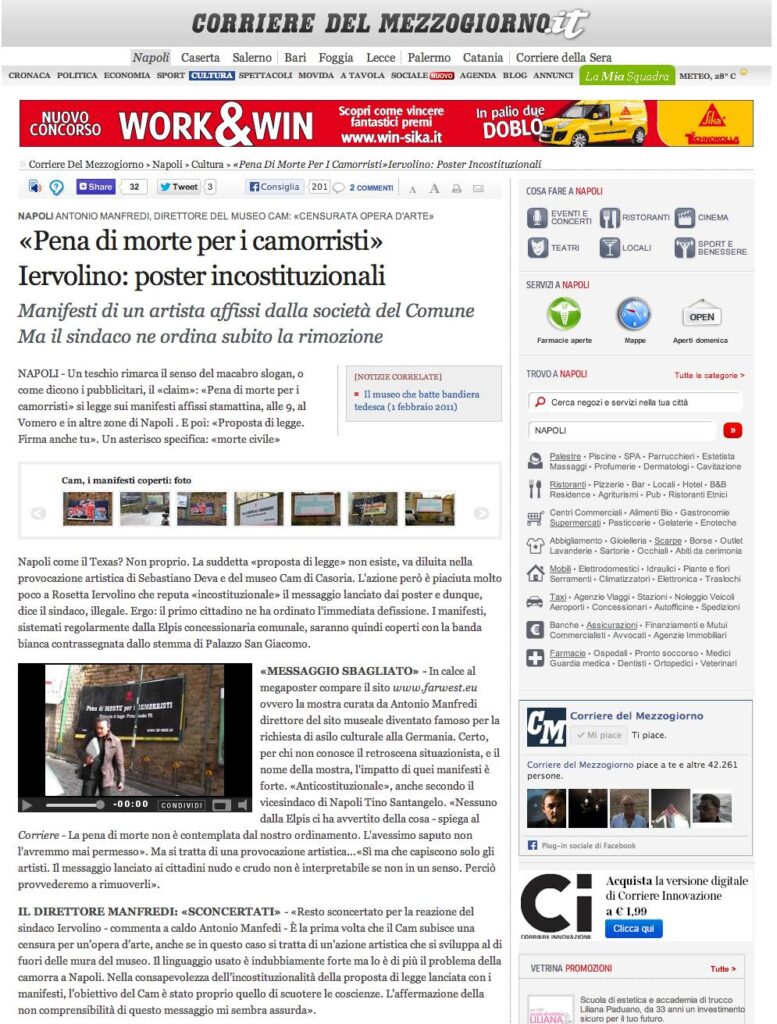 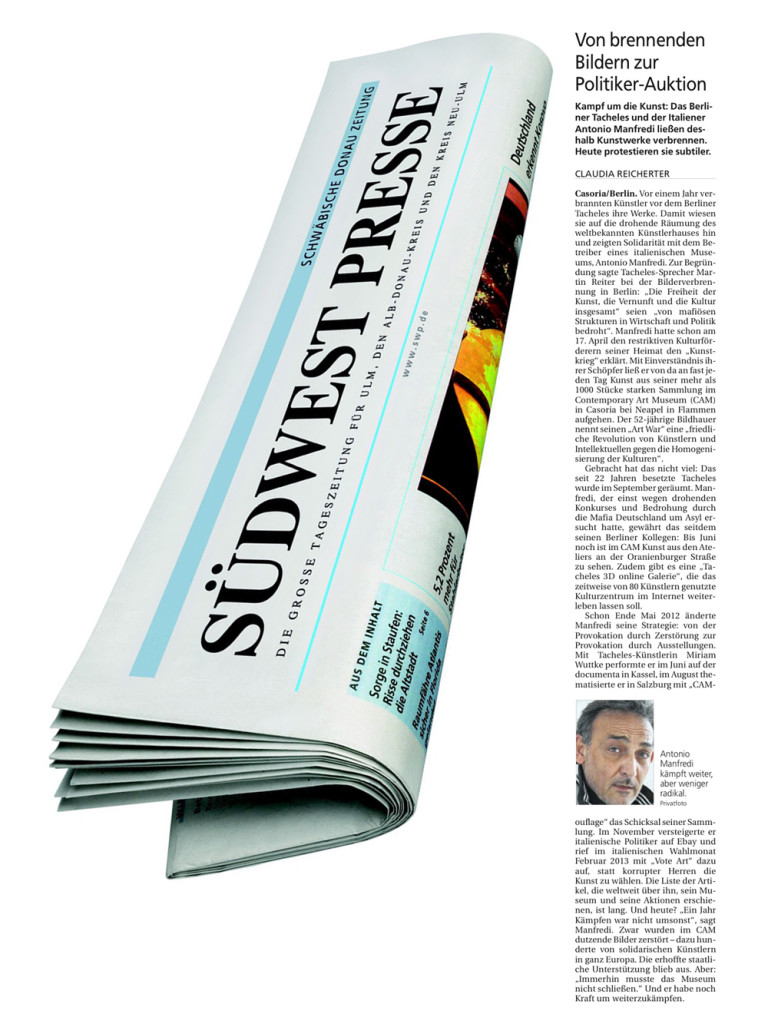 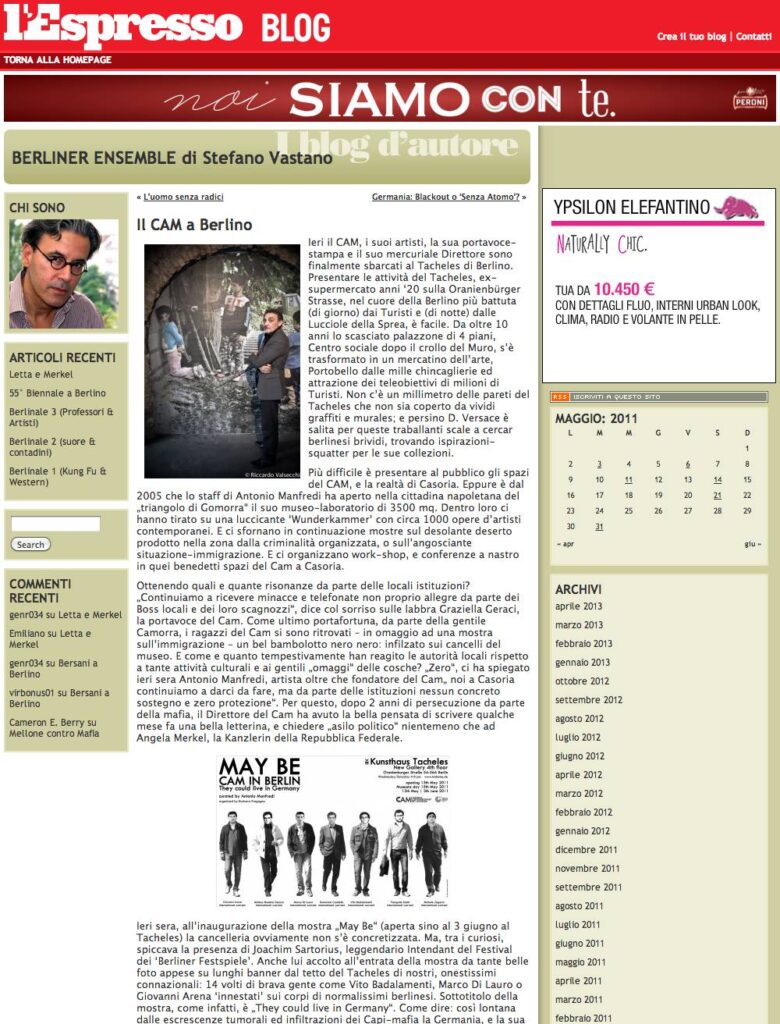 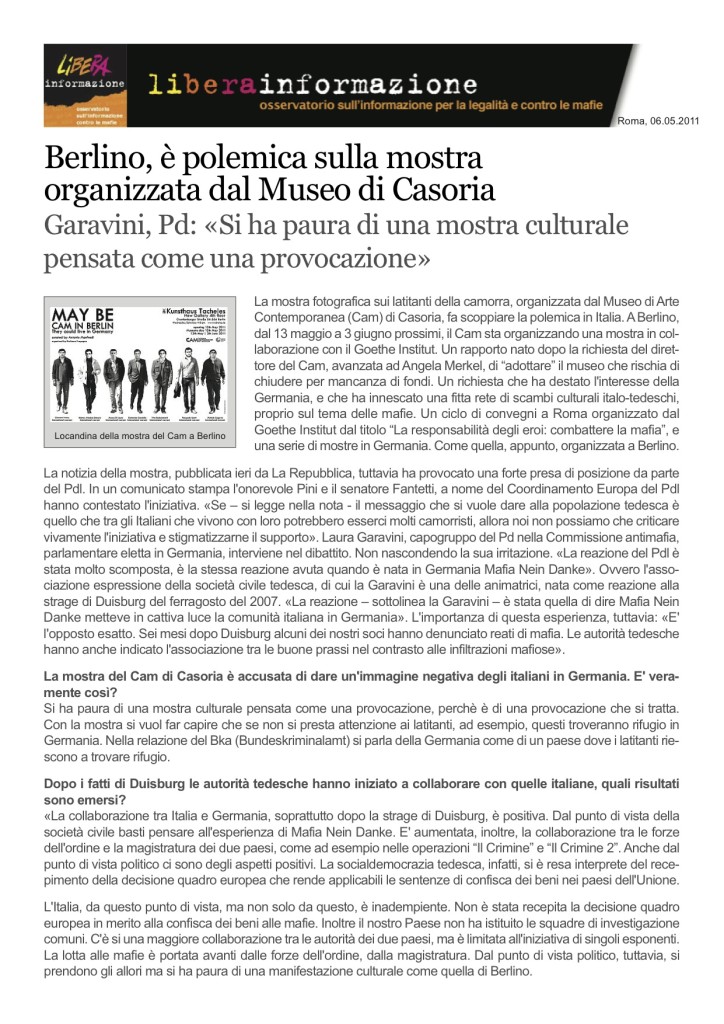 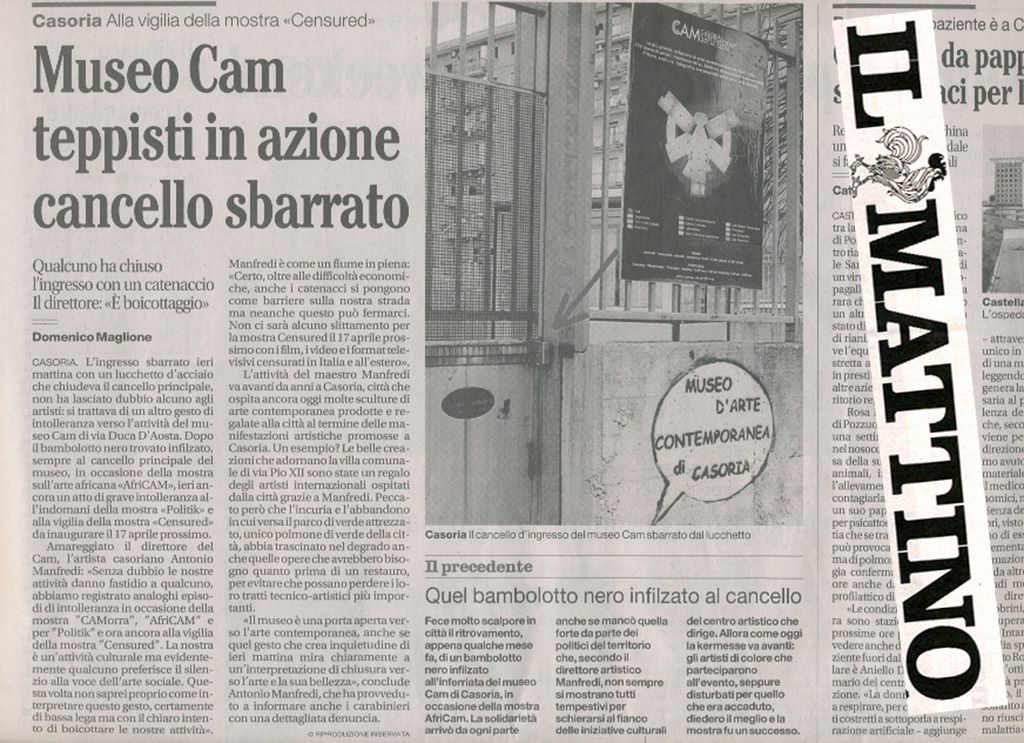 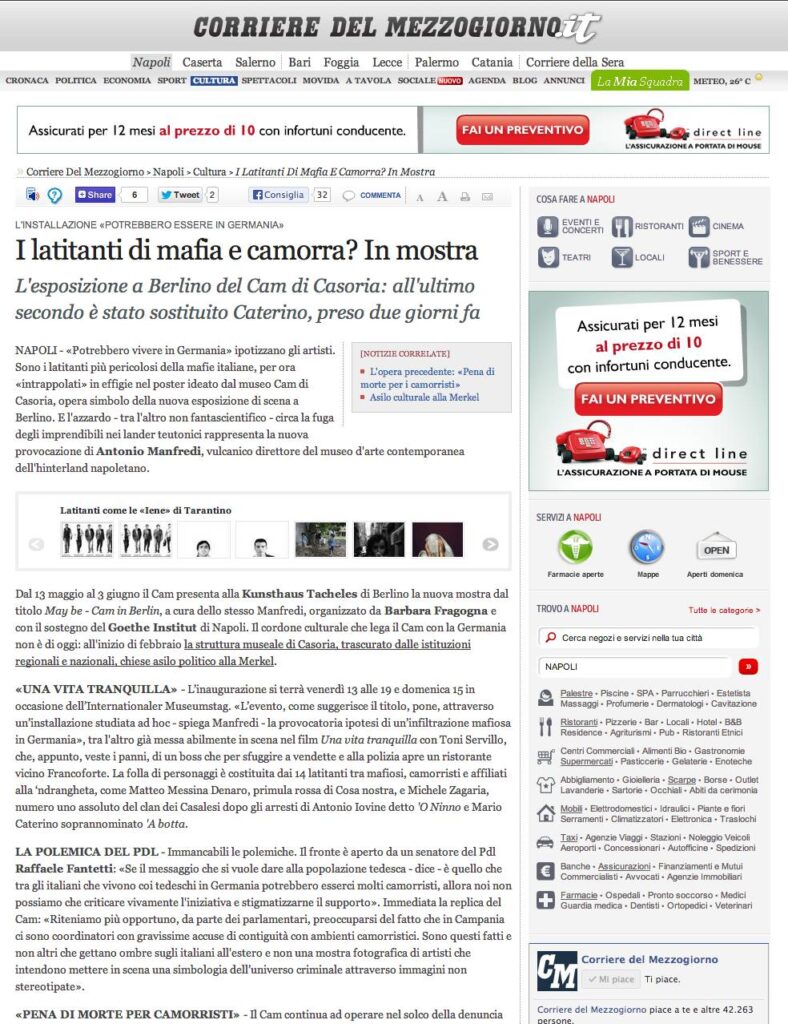 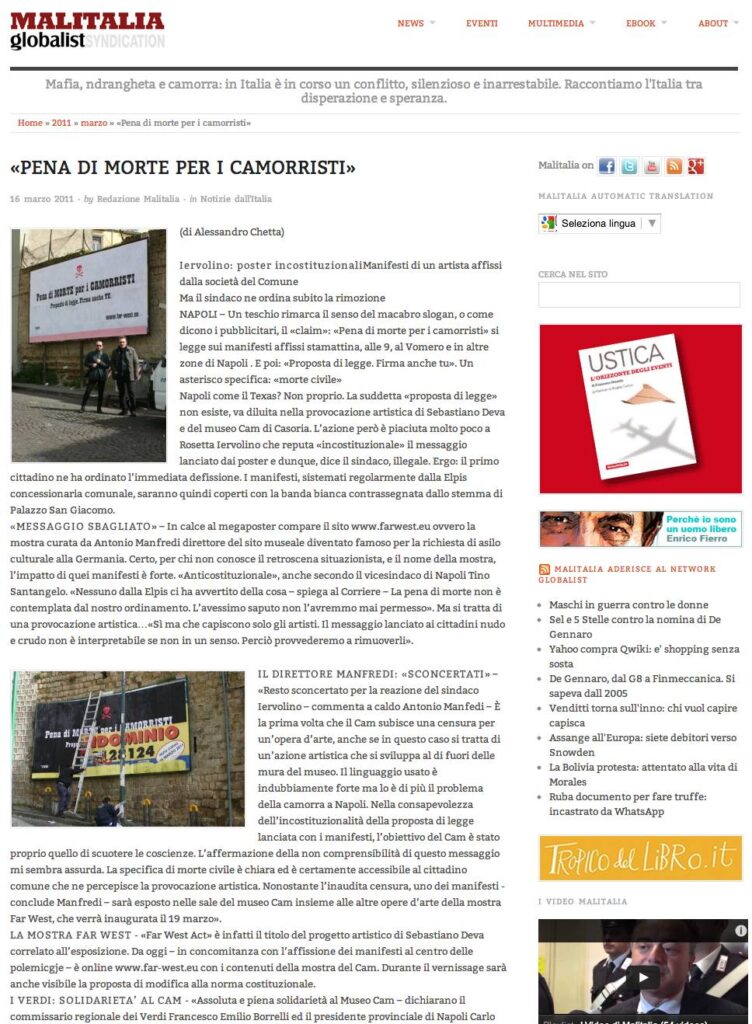 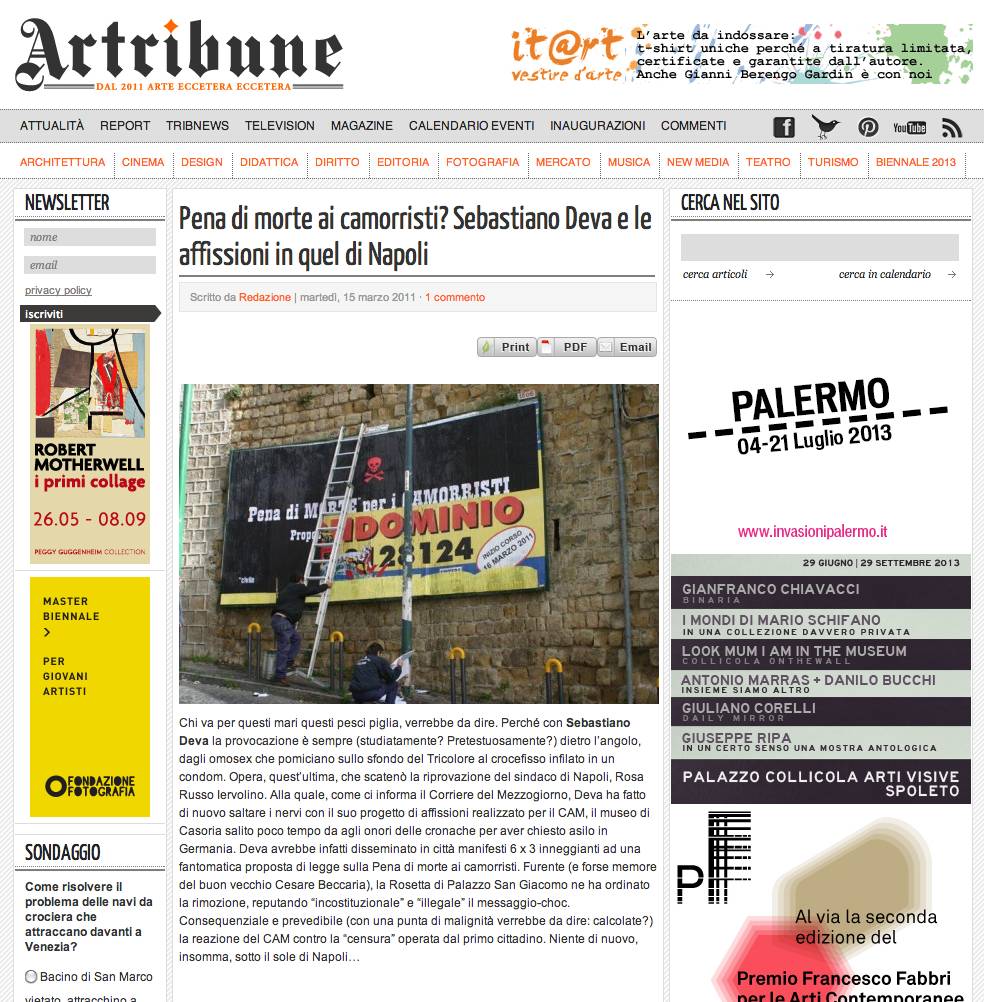 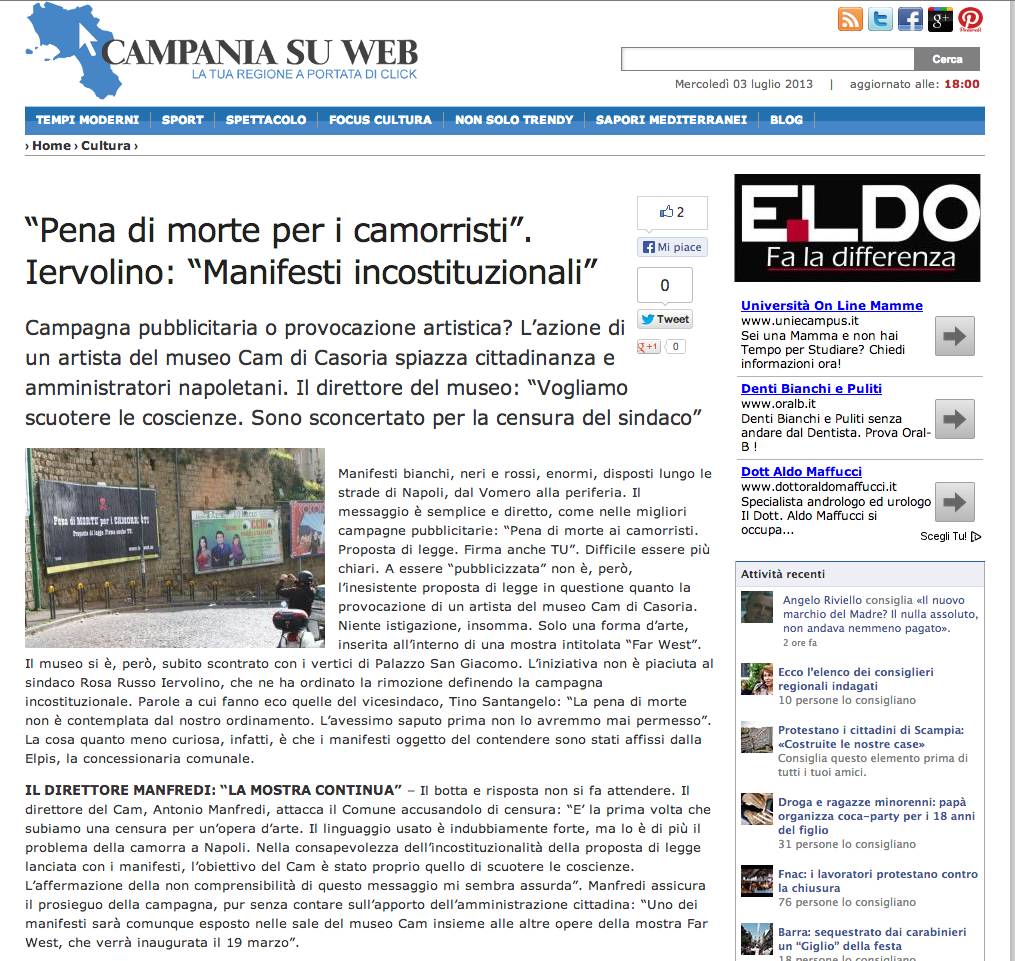 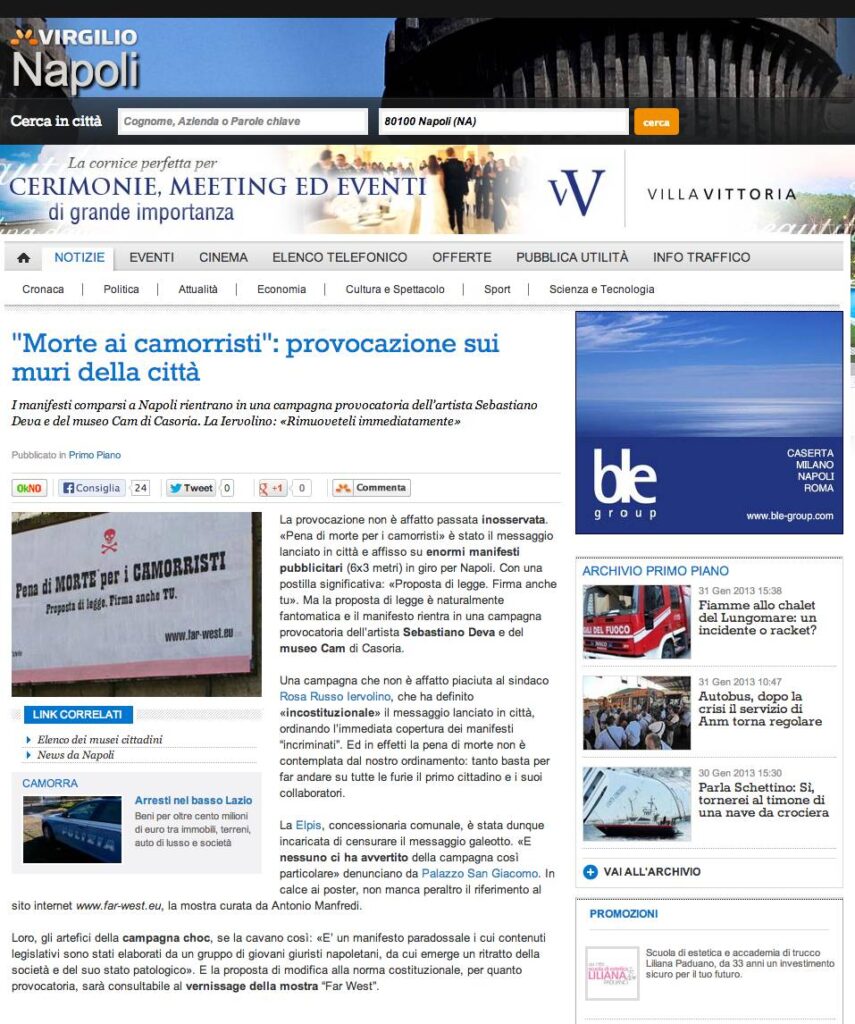 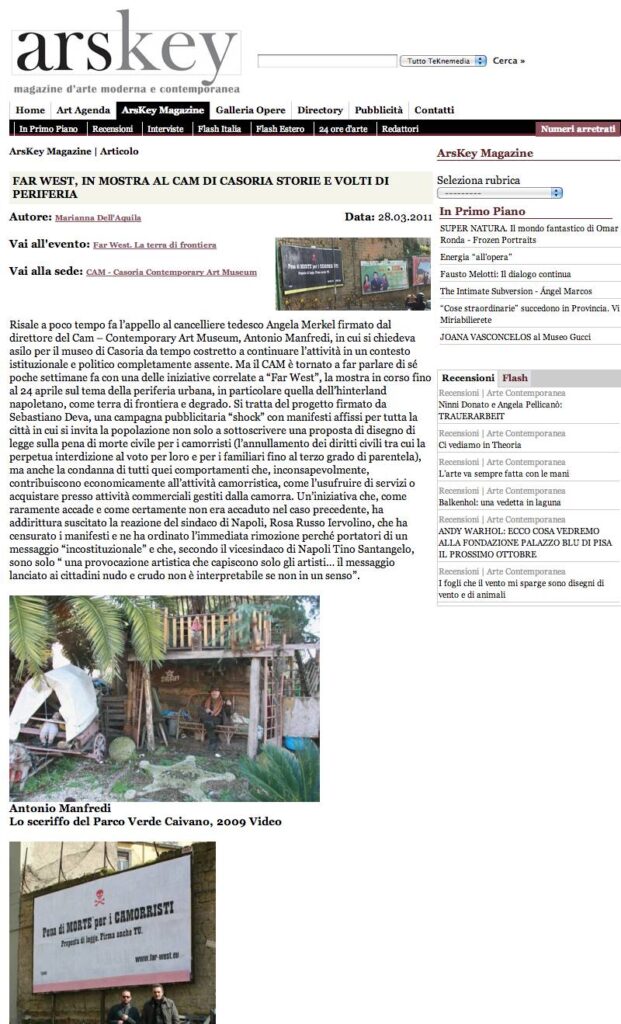 AFTERALL
Half-an-hour, 2008 Digital video 30 min.
Figures twisting like images reflected into the mirrors of consciousness, appear like oneiric visions carrying messages to decode. The slow transformation of the faces recalls the personal interpretation and the meaning of the outer influences on the thought of the social reality. The space limits the expression while the open space background leads to a sense of hope and change.

MONICA BIANCARDI
Our Lady of Rubbish, 2008 cm. 80 x 150 Photography.
The work is an open reference to the sea of rubbish in which Napoli sails since months. The tragic situation seems to find a solution in the religious reference rooting in the traditional Neapolitan redeeming concept. The figure with brightening whiteness and seraphic expression perfectly opposes with the very colourful covers of stinky waste provoking a benevolent smile and a spontaneous pray.

RAFFAELE BOEMIO
Voiceless, 2008 cm.170 x 150 Mixted technique on canvas.
“Aphonia” is the condition of silence and the impossibility to express uneasiness, the absence of sounds gathers and concentrates in the pure lines framing the absolute and almost unreal figure. The earthly colours reveal the tragedy of an existence unable to be heard and loosing its own awareness.

PIERO CHIARIELLO
Conversation in three with few light, 2007 cm 115,5 x 50 Digital print on pvc.
In the dark silence the conversation between elements distant in the time suggests fillings of the illicit power. A secret agreement joins the characters that, in the dark, agree on the destiny of a save mankind.

CYRO (CYOP)
Cultural industry, 2008 cm 54 x 54 Mixed technique.
The light outline of a factory carved in metal is tinged with bloody red invading the surrounding pace. The symbols of a decayed society pretending to be “politically correct” glide from the chimney flue. This is the industry of culture seeming it is producing pretence and out of which the organized CAMorra expands under the silent approval of a powerless respectability. The visual reflection recalls the abandoned industrial shed in the periphery, once work activities scenarios and, therefore, development; now just container of breakup.

KAF
Untitled, 2008 cm. 47 x 57 Mixed technique.
The message of submission and economical over-power by a criminal entity is rendered through a clear and direct language. The evil being is lightened by the golden colour – of course referring to the matter through which subjugation is carried and turns to mere ghosts those ones trying to survive.

LUCIANO FERRARA
Peripheries, 1980/2000 cm 40×50 Photo on paper worked with silver salts.
The picture shows a piece of the Neapolitan periphery. Deprived of any lively space, the houses witness unauthorized building and the way Camorra has subtly influenced urban structures. The Horror Vacui which determines the anguish in registering a moment fixed in the time assuming the valence of eternal status.

GIACOMO MONTANARO
Untitled, 2007 cm170x100 Acid and scratches on photographic paper.
Two human figures opposing, two contrasts, black and white, good and evil, the daily violence yoke that forces everybody – none excluded – to submit. Victim and persecutor are located in succession. The work plays with the ambiguity of the difference of roles: it is the dark figure to be tied, in fact. The bowed head is sign of the defeat for the camorrist abuse and oppression.

SEBASTIANO DEVA
Camorra’s eye, 2003/2008 Digital video with audio.
The Big Brother eye spies and imposes its presence. The mysterious entity controls with its terrific gaze the actions all around defining its inspection through a magmatic and penetrating sound. The image is disturbing and perfectly mirrors the nightmare of psychological submission.

FEDERICA RISPOLI
I can’t see, 2008 cm 50×50 Oil on canvas.
The face of a man shows fear and horror of all those forced to watch with no possibility to react. The desperation of those having no chance than cover the face with the hands so as not to see. But the eyes are wide as the soul cannot accept, the soul must watch to know the truth. To have the chance, one day, to speak, to cry to the world the horrors he assisted powerless.

SERGIO RICCIO
Ercolano, 1999 cm 74×120 Photografical print on aluminium.
A wall oppressing and occluding the vitality of the volcano that oleographically works as landscape to the lack of development of a territory torn to pieces. The jail elevates and imposes its condition of closed space beyond which an active world sleeps and is hardly able to make itself heard. The shadows of a prison power stands out on a wall of metaphors of real and always present entities.

WALTER PICARDI
Caccaricca, 2007 cm 130 x 15 x 15 Plexiglas, poliexpanded, synthetic ring with diamond.
The shrine usually containing precious objects becomes case for the society wickedness. The hypocrisy of an apparent richness reveals itself in its absurdity through the bejewelled excrement. Reflection takes the place to disgust and the game turns the gaze into thought. Irony spans the uneasiness wave while the shameless exhibition acclaims its real valence.

FIORENZO D’AVINO
The weight of family 2008 cm 27 x 27 x 27 Resin, Plexiglas, book.
The metaphor of weight is the sense of the historical oppression of a deep-rooted and omnipresent criminality. The scientific data of the existence of this illegal reality is in the book, in the words but, above all, in the actions perpetrating in the time always same. Now almost an existential habit, the criminal family makes its presence heard.

GIUSEPPE DI GUIDA
I was born in camorra land, 2008 cm. 400 x 150 x 50 Installation.
The Padre Pio statue dominates on the top of a tyres mount, protecting its safety from fire by vandals. The installation shows on the video the letter of the artist addressed to the exhibition curator. Words slowly flow and tell the casual finding of the saint saving from flames the waste of society.

BARBARA LA RAGIONE
Untitled-0, 2008 cm. 57×87 Photograph.
The work shows hybrid beings belonging to a sort of ancient religion symbolized by mysterious signs of strength and imposition relationships. The animal imposing is the warning sign of recognition signals and belongingness to the sect of the power still today influencing the social state.

CARMINE REZZUTI
Untitled, 2000_2006 cm. 195 x 195 Acrilic on canvas.
The wild feline devouring everything is symbol of CAMorra, of what seems to keep in its jaws a place in fire burning the throat of those incorporating it. The terrific animal with lava eyes, predominates and menaces with its massive and worrying presence. The work mirrors an oppressing and real condition.