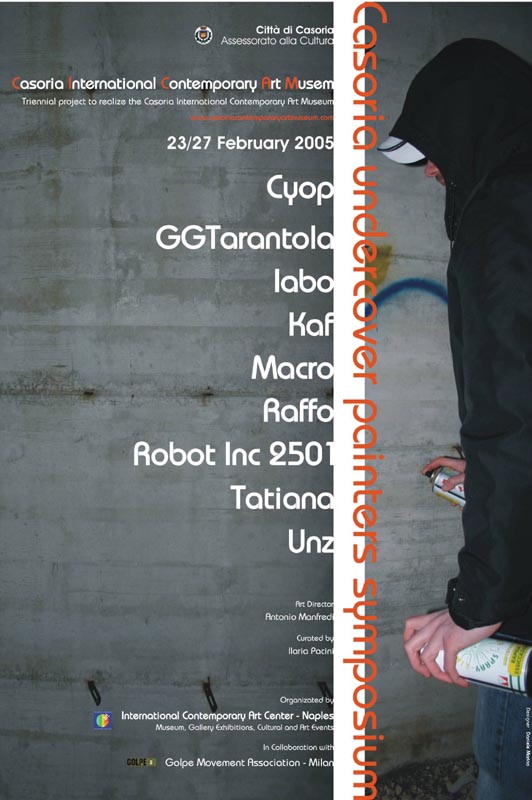 The idea of organize a symposium of Undercover painters in Casoria, together with the project of realize an International Museum of Contemporary Art in Casoria, was born in Venice, where I saw some writers run after the municipal police. I thought that, outside the important galleries, the art academies and the fairs, a cultural yeast exists, which reflects, maybe unknowing it, rumors, smells, rhythms, images and problems of contemporary cities. I immediately found a confirmation in Antonio Manfredi and in his project and after only two months I was in Casoria together with the 9 invited artists and their sprays, brushes and colors.
Undercover painters movement started with historical avant-gardes and today it matches and contaminates itself with chronicle, poetry, technology and with the solitude of those who live in the crowd.
But please don’t try to find in this production trawls of already defined of definable movement, it could be proper to see its expressive immediacy and its freshness in composition.
In fact the works realized in this symposium aren’t made to be looked at carefully, there aren’t virtuosities and pictorial experientialisms; the important thing is the man’s perception, not critic’s one.
Art’s historian couldn’t see anything interesting in Raffo‘s work, while a Neapolitan citizen will find in it the answer of a boy coming from suburbs who found in aerosol art the way in which he can improve himself and his world.
The approach of the other artists is different: each of them is carrying on an artistically research whose final product willingly can be read in many different ways, according to its placing – which can be both a museum and the street – .
In GGTarantola, Tatiana, Unz and Robot Inc2501 works, virtual reality and pixel world run into a post card-shaped Naples, which opposes the dark grey of buildings to the blues-greyest-violets-whites of sky-sea-Vesuvius. The result on one hand points out the thousands chances of multimedia art and, on the other hand, immortalizes this art into the pictorial way of expression, which has been chosen ironically in order to make the placing in a museum more solemn.
Cyop and Kaf work with different aims. Their two names are joined to Naples and its streets. This time they didn’t choose as support neither walls nor train’s wagons, but a yellowing wallpaper where they put the framed pictures of their works and, through the stencils, they propose again some expressive models which were typical of post-graffitism and street-art. In this way their recent work shows its relationship with their former art production, which finds in Naples alleys its habitat.
Iabo and Macro‘s works close the group. Both they are Neapolitan and connected with street-culture but, through academic studies, they join to expressive experientialism a reflection on contemporary society. Mostly Macro inquires into the phenomenon of shopaholic “veneo ergo sum”, while Iabo uses the graphic of advertising images to catch the viewers attention and let them understand his message in a simple and immediate way.
In short, a brief view of an art that is far from parlors and cliché.
Ilaria Pacini, Milan, March 2005