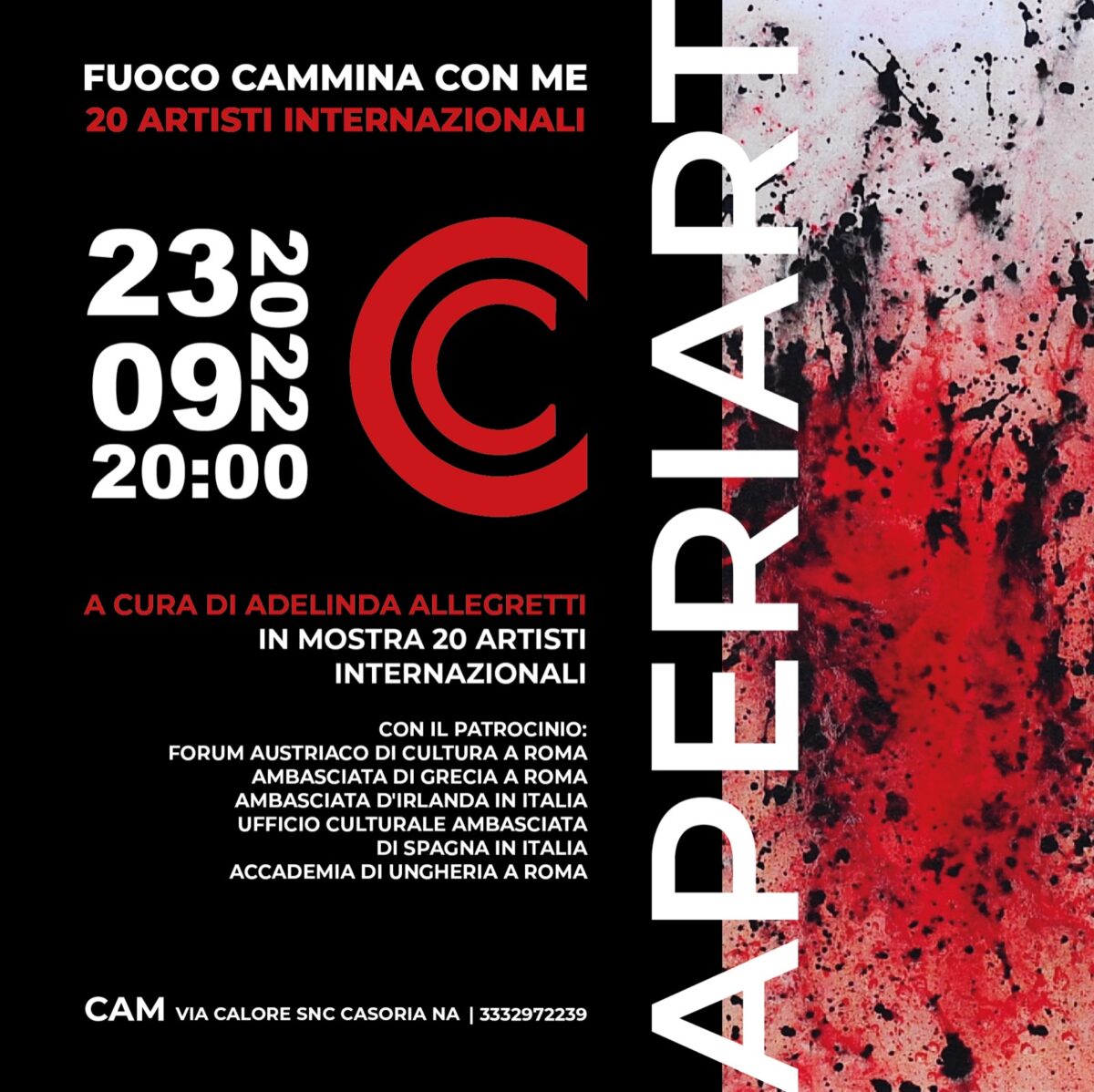 SILLABA
“You sound of all things”
Concert and presentation of the new Video clip
Friday 23 September 2022
Start 9.30pm 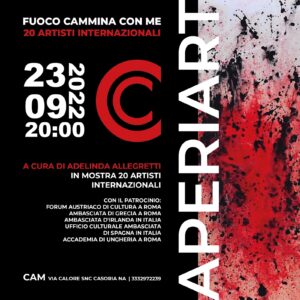 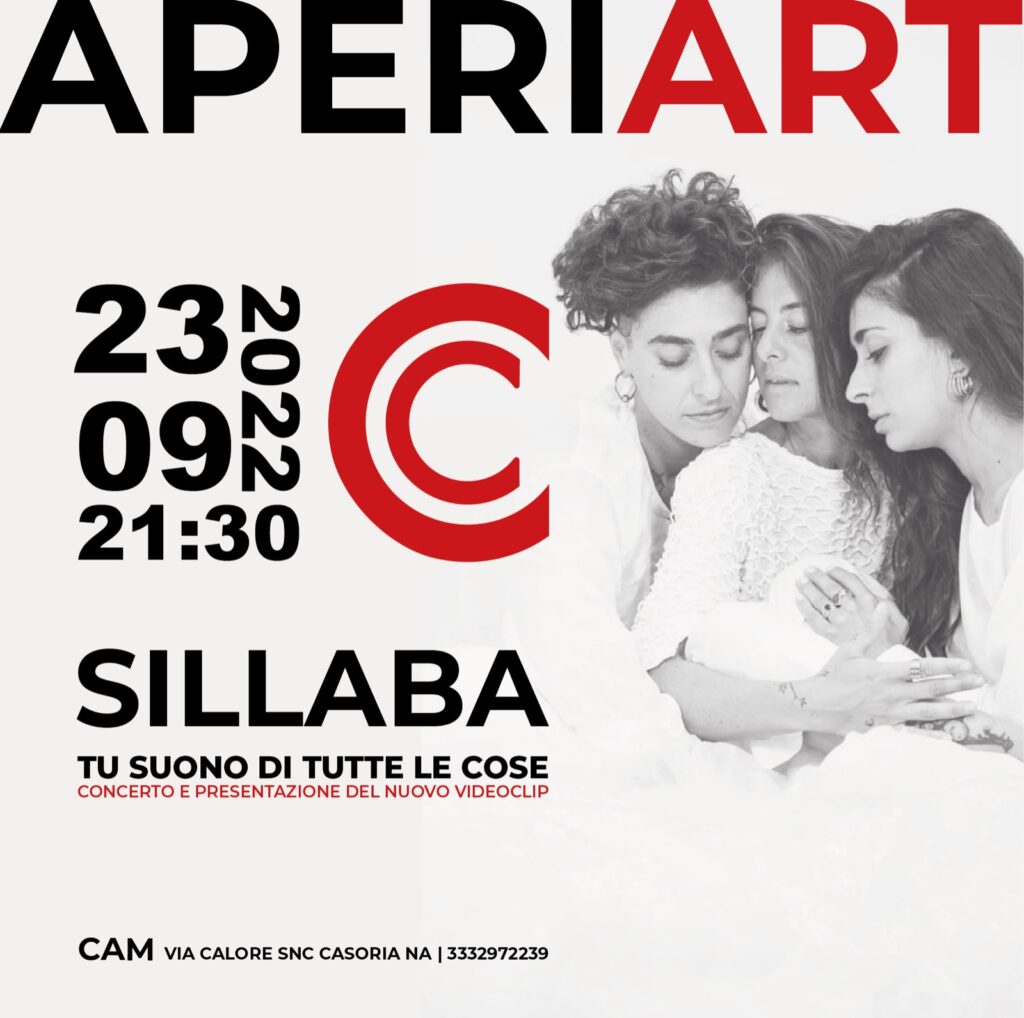 TEXT IN CATALOG
For the exhibition at CAM_, artists were specifically asked to give visual form to their personal idea of fire. And so, for the Hungarian-Canadian Tibor Hargitai, fire is literally accompanied by water, earth and air in a polyptych entitled 4 ELEMENTS? (2022). Their bond is inseparable. By contrast, in After the Fire Has Died (2022), the Australian artist Joy Engelman depicts destruction outright. The passage of fire leaves no escape, devouring everything and leaving a heap of ash and elements that are no longer recognisable. In Fire & Ashes (2021), Christina Mitterhuber, from Austria, also hints at flames and ashes blown up by the wind, though without as much fury. The same intensity is inherent in Paz y libertad para Ucrania (Peace and Liberty for Ukraine; 2022) by the Spanish artist Valentín Gallego Gallardo, where the fire is that of bombs. There is no need to depict it, just to evoke its passage. Fire is also the destructive force in both works by Gianmario Quagliotto, Eolie, il risveglio di Vulcano 1888 (Aeolian Islands, the awakening of Vulcano, 1888; 2022) and the contemporary Lato alieno della Terra (Alien Side of the Earth), together with Carmelo Compare’s Fuoco cammina con me (Fire Walk with Me; 2022), featuring pure, incandescent lava proceeding slowly yet leaving no respite. In Re-reading of Art History, A Baker and His Wife, Pompeii, 1st Century AD (2019), Chinese artist Fu Wenjun gives a pop interpretation of the subject, though for those of us who know how it turned out, it has the force of a memento mori…

Guglielmo De Filippo’s work is the next step, and Rinascita della Fenice (Rebirth of the Phoenix; 2021) clearly conveys the life and hope inherent in the firebird’s symbolism. We are at a turning point.

Materia nera con tre crateri rossi (Black Matter with Three Red Craters; 2021), by Violino Mantieco, completely sublimates the idea of destruction. That heavily ravaged surface, evoking a landscape after a lava flow, and boiling craters, becomes the embodiment of a transmutation. What if it’s more of an inner turmoil, slowly making its way deep inside us, only apparently destroying, actually giving birth to something ‘other’?

From here on, fire is not only no longer frightening, it gradually becomes an ally. In the canvas by the American artist Isolda Mora Noli, Rainforest Girl (2022), the human figure and nature intertwine to such an extent that it becomes impossible to distinguish them; similarly, the complementary colours red and green behave like two apparently opposing entities mutually enhancing each other. Next, the delicate, small and precious watercolours by Canadian artist Catherine Perehudoff Fowler, Flaming Clouds (2021) and Red Clouds #5 (2008), igniting the sky and its reflection in the water with a red glow that brings the landscape to life. The same sunset sky appears in My Only Sunshine (2013) by Turkish artist Ersoy Yilmaz. Also by him are two other contemporary ceramics, Match and Smoke respectively, in which the fire is the dying one of a cigarette.

In the works of Irish artist Fintan Whelan, Among the Flames I and II (2022), the destructive power of fire is only a distant memory. Everything moves, in accord with it, in a fluid and enveloping manner. Here, even the red of the flames gives way to less impetuous and aggressive – I would say diluted – hues. Even so, the colour red does not disappear, rather, it changes role. In her Rules of the Game of Luck (2022), the Greek artist Marie Perrakis inserts words such as ‘hope’, ‘God’, ‘spectre’ and many others, now written in ancient Greek, now in Hebrew. That red tangle, the Sacred Fire of Passion, holds endless possibilities, just go and read them, look them up. We are moving to ever ‘higher’ levels of interpretation. Marina Iorio delivers her vision of fire through Alhena (2022), the white subgiant star, the third brightest in the constellation Gemini. Its name in Arabic, Al Han’ah, means ‘firebrand’.

In A Little Magic III (2001), the English artist Anthony Gerald Binns drew on the idea of the cauldron of sorcerers and witches with great irony. It is the athanor that guards the fire of alchemical transmutation, a sort of furnace that’s not so far removed in its iconography from the belly of the volcano. The transition to Olga Buneeva’s work is as fluid as Whelan’s work… It’s no coincidence that Il vulcano (The Volcano; 2022) is a ceramic work and therefore cannot do without the kiln. The exterior is dark, imperfect, modelled perhaps more with the idea of emphasising the content than the container itself, so much so that all attention is focused on that red-lined neck.

The passion that moves from within is the common denominator of Roberta Minaccioni’s three works – Lidia, Paola, Romina (Mo, profumo di albicocca; Mo, Scent of Apricot) – all dated 2022. Portraits of strong women who, thanks to their determination, have made their way in work and in life, in spite of all uncertainties and fears. This, too, is fire.

And speaking of fire, it was impossible to overlook the one who, in defiance of all orders, gave it to mankind. Lorella Lion’s Prometheus (2022) draws inspiration from the fire of knowledge and civilisation, in their most positive interpretation. But, I might add, Prometheus was also disobedient, otherwise mankind would have known a different story… Here, again, is the idea of something relentless, that engulfs everything and that, when it presents itself, is beyond arrest.  At the same time, it is also precious, that is the meaning of the gold leaf. I would like to draw to a close with Anime dannate (Damned Souls; 1999) by Silvia Pisani and the passion that envelops the naked bodies, but only to ‘rehabilitate’ the idea of the flames of sin and disobedience…
Adelinda Allegretti
Translation by Francesca Cecchini