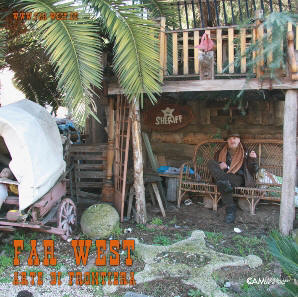 NICOLA METTE
What game we play, 2011 Installation
The Far West is the place where roles reverse, where the sheriff, guardian of the law merges with bandits, where the “madams” influence the city life from the brothels of the power, where the women-object blackmail with the help of guns the established order, like in the installation of Nicola Mette, with certain references to the actual political situation.

SEBASTIANO DEVA
Pena di morte per i camorristi, 2011 Action art
It is the lack of law in an extreme territory to lead the performance of Sebastiano Deva. From the advertising posters hanging in the streets of Naples parte a request to support a proposal of law: death sentence to Camorra people. Deva gets to the final act through a direct and irrefutable language revealing the artistic project here at CAM concluding. A strong and resolute provocation.

LETTI SFATTI & ERRI DE LUCA WITH PATRIZIO TRAMPETTI
Questa città, 2011  Video and music performance
In the Far West exhibition, the investigation on the city peripheries travels also through the denouncing lyrics of the Province Rock by Letti sfatti e Patrizio Trampetti. In the chorus song on Naples, “Questa città” (This city), written in cooperation with Erri De Luca (narrator voice, avatar protagonist of the video and author of one of the tales from the book coming along the song, previewed at CAM), a landscape of sufferance and redemption emerges

ALESSANDRO FALCO
Vincenzo, 2010  Film
The release is longed by “Vincenzo”, the sweet protagonist of the movie of Alessandro Falco(awarded in Barcelona and for the first time screened in Italy at CAM), the story of a young boy from the province dreaming to flee from the oppressive degradation of Naples periphery riding his moped.

LELLO LOPEZ
Cyrus, 2006/2010   Video and photo
The silent escape of the Pozzuoli tramp in the video-installation proposed by Lello Lopez, is a tale with no words leads to an oniric dream born out of neglect and degradation.

DI GUIDA&VARGAS
CAMDONALD’s_Prossima apertura/Upcoming, 2011  Installation and performance
The sharp and polemical installation of the two artists Di Guida&Vargas chooses to display a sarcastic awareness of the social situation.

SALVINO CAMPOS
Untitled, 2000   Photo
The quest for a shelter, a personal space to relief the soul from the difficult Far West, appears in the poetical photography of the Brazilian Salvino Campos, whose religiousness is the only way to recover from sufferance.

PEPPE ESPOSITO
Il pistolero di plastica, 2011  Print on mirror
What is our role? What is the role of museum visitors? Sheriff or cowboy? Peppe Esposito’s work, plays on the identification, through the mirror,  with the image of the gunman and raises a question about the legal acts that we do really. The man in the mirror, the sheriff, always acts properly or unconsciously gets caught in the web of illegality?

LUCIANO FERRARA
Napoli Scampia, 2009 Photo
Pubblic ostentation of garbage and impudent jubilation of charm, the Parthenopean territory is observed through the work of the photographers Luciano Ferrara and the gruppo Wine&Foto exhibiting the contradictions of an area sometimes abandoned to itself but not resigning to its troubles.

ANTONIO MANFREDI
Lo sceriffo del Parco Verde di Caivano, 2011 Video
The video shows a sceriff  that built his identity in his Far West, setting up a wooden ranch in a park of the Parco Verde of Caivano, province of Naples.